There’s history within the walls at the new Guilford Hall Brewery. Having opened last May, this addition to the Baltimore metro area’s craft brew scene occupies the former Crown Cork & Seal building in Station North, which dates back to 1898.

It was the first factory floor to manufacture the modern-day bottle cap after local inventor William Painter patented it in 1892.

“I mean it’s just great to tap into the history—pun intended—of its roots of why it was constructed in the first place,” says Richard Craft.

Craft is co-owner of the German-style beer hall at 1611 Guilford Ave. With a goal of retaining the industrial feel of the original architecture, he and Stefan Popescu commissioned a 2½-year building renovation and brought Karl Nunn of Elite Contracting Solutions in as a third partner along the way.

Their efforts won an architectural award from the Urban Land Institute for reuse of the space, Craft says.

Part of this recognition resulted from utilizing many items that were already here, he says. Tables and bars were crafted using original wood from the building. Original floors were restored. 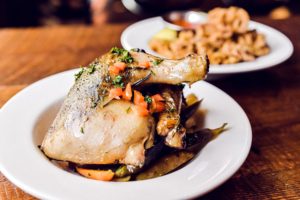 Now the brewery—which shares building space with an artist co-op in the Station North Arts District and Greenmount West neighborhood—includes a year-round beer garden (and a side bar) and the 3,000-square-foot banquet-style Crown Hall that can accommodate events with up to 250 guests and weekly live music.

Craft says the menu reflects European beer culture, with staples such as schnitzel and beef stroganoff, and of course, a great burger.

Guilford Hall has the classic beef burger, but the culinary team also branches out with a lamb burger, served with arugula, tzatziki and goat cheese on ciabatta.

Executive chef Alex Pardo started his career in California before moving to Florida and then Maryland. He served in Baltimore for two years and in Howard County for almost 10 years at Frisco Tap House in Columbia until “Baltimore worked me in again,” Pardo says.

He joined the Guilford Hall team three months ago but overhauled the menu within a month. “We can see the evolution already in the food,” he says.

His personal style involves using copious fresh ingredients and sourcing locally from farmers and fishermen. Right now, he draws from Kreider Farms and Fred & Richie’s Farm, both in southcentral Pennsylvania, and Casey’s Crab Co. in Laurel.

And, he says, “we try to combine a little bit of everything” rather than stick solely to German influences. His creations have roots in the Mediterranean, Italy, Greece, Apollonia and Poland.

Authenticity is what truly sets the brewery apart. Brewmaster and director of operations Martin Coad is German-trained through Hofbräu München. He brews according to well-documented traditions.

“In certain cities around the world, they’ve spent hundreds of years honing 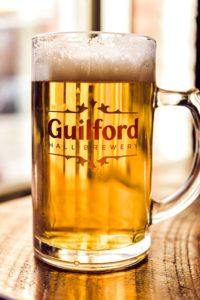 these particular styles,” he says. Although you can go to a liquor store and buy a German beer, he adds, the difference at Guilford Hall is freshness.

“It takes a minimum of two months for beer to get here from Europe. At that point, it’s not as good as it would be,” Coad says.

Guilford’s Wachsman-brand brewhouse, originally Austrian but customized by Baltimore-based brewery engineering company Balt Alloy, churns out a lot of lagers—bucking the craft beer trend of hazy IPAs and fruited sours. And for the non-beer drinker, the brewery also has a full bar serving wine and craft cocktails.

But Craft’s team determined it was the space itself that was really missing in Baltimore compared to other major cities. The fact that it’s a combined wedding venue and live entertainment space, full-scale restaurant, brewery and manufacturing facility, “there wasn’t really any other competition in this type of space,” he says.

In addition to indoor seating and a chef’s table that guests can reserve for up to 12 people, a beer garden out back seats 125 and includes a heated tent. An auxiliary bar sits to the side, with a few beers on tap amid rustic, hanging lights next to an area for lawn games and cornhole. Dogs and kids are welcome.

“We very much want it to just be a community-centric space,” Craft says, “an extension of the community’s living room.”