I’ve lived in Baltimore for 24 years, longer than I’ve ever lived anywhere. But when I go to Ohio for the holidays, I still call it “going home.” Romance novels are full of people who “go home” and “find love.” Life is full of people who have no “home,” whether through decisions or circumstances, and find a new home elsewhere. Each of these books touch on the subject of home—even if its location is not always stable.

In Jamie Brenner’s “Blush,” Leah heads home to Long Island from the city. She grew up there on her parents’ vineyard and had expected to take it over, but her dad felt the business should go from father to son, leaving hapless brother Asher to run the company. Leah, her husband Steven and their daughter Sadie turn what was going to be a week away from daily life stresses into a rethinking of their life’s plans. Vivian, the matriarch, is forced to face a decision she made as well. When Leah discovers the winery is in financial straits and might be sold, her childhood dreams of being the winemaker return. Meanwhile Sadie, a budding academic, discovers the trashy ’80s novel stash of her grandmother and sets aside her thesis for Judith Krantz. The winery doesn’t just belong to the Hollanders though; many of its workers have considered these acres their home for years too. As the novel’s elements blend, each character must answer this question: If home is where their heart is, where does their heart truly live?

Illustrator R. Kikuo Johnson’s new graphic novella “No One Else” is a beautiful depiction of a family living in his home state of Hawaii. Single mom Charlene lives with her son Brandon, his cat Batman and her ailing father who needs fairly constant care. When her father dies, Charlene and Brandon struggle. Along comes ne’er-do-well brother Robbie, an aging hippie musician. Meanwhile, Batman runs away. As adults, Charlene and Robbie alternate between falling into bad old habits and trying to get to the next phases of their lives. Charlene might be easier to root for on the surface, but Robbie is not entirely wrong on the things he calls her out about. Fear not … the ending might have more questions than answers. Spoiler alert: Batman is OK. 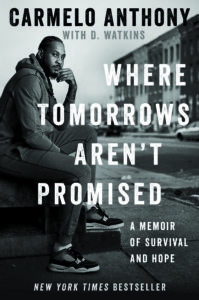 The beautiful memoir “Where Tomorrows Aren’t Promised” by “hometown” hero Carmelo Anthony completes this issue’s selections. Anthony wasn’t born in Baltimore but in the housing projects of Red Hook, Brooklyn. After the death of his father, his mother—perhaps after seeing his older brothers disappearing into the streets— moves the younger part of her family, Carmelo and his older sister Michelle, to West Baltimore. At every turn, Anthony has guardian angels—the older kids and men who tell him about the nearby rec center and the coaches who encourage him not to settle but strive for higher. Go to Towson Catholic instead of Dunbar. Go to Oak Hill Academy and Syracuse. As the book ends, Anthony goes to the NBA Draft instead of returning to school. But what is left explicitly unsaid is how slim the line is between becoming one of the 75 Best All-time NBA players—an honor Anthony recently received—and jail or death, the outcome that talented friends and relatives experienced. D. Watkins helps Anthony shape his tale, and his gentle humor and storytelling skills are evident. However, the text remains Anthony’s voice. The voice of a young Anthony comes through loud and clear; he vividly remembers the often immature decisions he wanted to make.