Erin Allison’s business is honey, but not just any honey. It’s honey with a cause.

Hon’s Honey employs women who are survivors of addiction, sex trafficking, generational poverty and trauma; 100% of the proceeds go toward their employment. The brand is an extension of the life development program offered through the nonprofit The Well, established in 2013.

Each day, employees acquire raw materials and supplies and make all the candles, soaps, lotions and other beauty products from scratch. In doing so, they gain essential business skills to move forward.

Products include “Warsh bars”—gentle soaps infused with honey and essential oils—candles made from 100% natural beeswax and raw honeycomb. 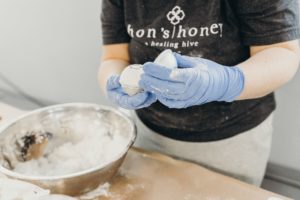 While reflecting on a block of rowhomes in Baltimore that had caught fire, Mandy Memmel, The Well’s founder, had this idea that Baltimore would be prosperous again–“a land flowing with milk and honey.”

A 2020 article from Al Jazeera named Curtis Bay, the Baltimore neighborhood where The Well is located, as one of the most vulnerable to human trafficking.

Allison knew she wanted to help survivors after she heard about the program through her church.

“I visited, and I just kind of fell in love with the grit, their realness and the beauty of being fully transparent and asking for help when you need it,” she says.

Allison joined as office manager in 2016 but quickly moved into an opening for program director. She served in that role for two years before becoming director for Hon’s Honey when it launched in 2018.

Hon’s Honey is modeled after a social enterprise called Thistle Farms out of a residency program in Nashville. The rest came together naturally.

One of the largest, most active gardens in the community, Filbert Street Community Garden made the program aware of a honey surplus. Memmel’s daughter applied her background in essential oils. She researched how to incorporate honey and beeswax into beauty products, and Hon’s Honey was born.

As director of the enterprise, Allison says her duties include writing grants and managing wholesale relationships.

Hon’s Honey has about 50 active wholesale contracts, mostly in Baltimore, Annapolis and Washington, D.C., with a few in seven other states. Allison says part of the reason for this client base is the growing niche of shops that sell fair trade and social impact brands.

But they do have the odd store or two that doesn’t quite fit the mold.

Chesapeake Car Wash in Annapolis has a gift store that sells their products, and the Wild Bird Center in Severna Park has a honeybee-related section. Hon’s Honey has also been included in a few hair salons.

Allison says coming in with sensitivities from traumatic pasts can be challenging for employees, but the work has helped them tackle their pasts in many ways.

Simple starter tasks, such as packaging and candle making, help build confidence because “there’s no mistakes in candles,” she says. Since they’re only working with beeswax, the team can always melt imperfections and try again.

Hon’s Honey started out with four women. Twelve are currently employed through the program.

The goal is always growth, Allison says. That growth could mean employees moving up in the ranks at Hon’s Honey or moving on to employment elsewhere.

“We let them set their own goals for what their passions are,” she says.

Allison has also seen firsthand how the work has helped their beekeeper—a graduate of The Well—work through her anxiety and traumatic past.

“She says that when she steps into the bee yard, from the outside it looks chaotic … but she says it focuses her,” Allison says. “She can’t let the things that usually cause her anxiety, like in her life and the world,” draw her attention away from the bees which require it.