Herman’s Bakery is generational for its staff and its customers. Hear from fourth-generation baker Adrienne Coyle Porcella and a third-generation bakery customer from Dundalk who always goes home to Herman’s for the holidays.

Visit Herman’s Bakery and Catering on Holabird Avenue in Dundalk and step into the Herman-family time machine. Opened in Highlandtown in 1923 (as Harry’s), Herman’s moved to the current building with its funky, throwback architecture in 1958.

Adrienne Coyle Porcella runs the shop with her mother and uncle, Harry J. Herman Jr. She is a fourth-generation baker there, where the fifth generation also works. 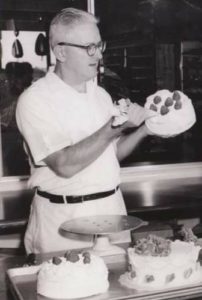 Dundalk native Michelle Lynn Hardman-Cabelus is the third of four generations of Herman’s fans. Her mother, Linda, worked at Herman’s when she was in high school and had her wedding cake made there.

“She still has her cake topper!” Michelle says. She lives in Texas now, but trips home include two runs to Herman’s—coming and going. Holidays, she says, wouldn’t be the same without Herman’s.

“When we come into town, we go to Herman’s for two dozen gingerbread men, fudge-topped cookies and the strawberry shortcake.”