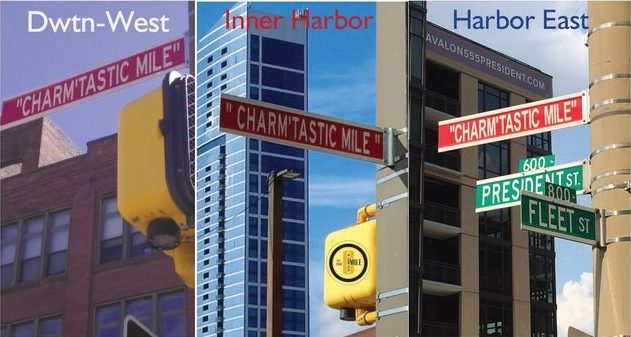 Baltimore’s “Charm’tastic Mile”—a 1.3-mile corridor that connects downtown Baltimore, the Inner Harbor and Harbor East—will be recognized with its own day Monday, April 25.

Scott calls it “the centerpiece of our great city.”

“By celebrating the Charm’tastic Mile, we celebrate our city’s uniqueness,” he said, when reached via email Monday afternoon. “Baltimore’s vibrant culture, diverse businesses, and world-class attractions are what truly make us ’Charm City.’”

The date is significant because it marks the sixth anniversary of the establishment of the mile in 2016—which also shares history with an iconic Baltimore landmark, the Domino Sugars sign.

That sign has come to be synonymous with Baltimore, and Derrick Vaughan, founder of “The ‘Charm’tastic Mile’ of Baltimore (Love That 1.3),” the organization behind “The Mile,” hopes the 1.3-mile stretch will one day be the same.

Following the death of Freddie Gray—who was killed in Baltimore police custody in 2015—and the ensuing unrest in the city, the mile was created in part as an effort to reframe the city as a tourism destination again.

The Inner Harbor had its last major rebranding effort in 1980 with pavilions meant to draw visitors downtown. The harbor became a vibrant shopping district thanks to those efforts—though in the last decade, compounded by COVID-19, many of the businesses in those pavilions have closed.

Vaughan believes the “Charm’tastic Mile” title will give Baltimore more national recognition by putting it in the leagues of other cities with iconic street titles, including “The Magnificent Mile” in Chicago, “Bourbon Street” in New Orleans and “Rodeo Drive” in Beverly Hills.

When reached via email Sunday, Vaughan said his inspiration behind creating Baltimore’s “mile” was Arthur Rubloff, a real-estate guru that coined “The Magnificent Mile” in 1947.

Officially becoming a registered trademark in September 2020, the “Charm’tastic Mile” is one of the few streets in the nation to have that distinction. It is among the top 10 to 15 most famous and iconic streets in America, Vaughan says.

Its backdrop of attractions including Oriole Park at Camden Yards, M&T Bank Stadium, the World Trade Center and The Hippodrome will make “The Mile” a business and tourist destination in Baltimore and beyond, Vaughan adds.

“The sky’s the limit for Baltimore and the ‘Charm’tastic Mile’ in the next four to five years,” he says.