Jax to the Max A frequent visitor to Jacksonville, Fla., sees the city shift from cultural wasteland to wonderland.

When my dad moved to Jacksonville, Fla., in 1999, to take a job, my stepmother and younger sisters in tow, it was like many other port cities at that time—a place with a great location on the water but past its prime. The downtown did look impressive with its skyscraper skyline. And yet, it was totally dead on evenings and weekends. No one lived, shopped or ate downtown. There were hardly even any places for office workers to buy lunch. For many years, I thought of Jax (as locals call it) as a place to binge-watch Netflix with my family at Christmas and eat at Carrabba’s. Granted, there were blue skies and 70-degree temperatures outside when we traveled via SUV between their house and the miles and miles of strip malls. But the overall impression was: Meh.

This year, when my husband and I flew down for our winter visit, we happened to arrive on the day of a food truck rally downtown in Hemming Plaza, as seems to happen frequently now. There were about 10 trucks, and the crowd was thick, people struggling to find enough chairs at the bistro tables in the public square. The sun was bright and warm. Kids in strollers and dogs underfoot napped while families ate tacos, barbeque, ice cream, seafood and more.

After lunch, it was a short drive to the Riverside Arts Market, which is like the JFX Farmers’ Market, except

with a scenic view of blue water. A band played on a soundstage at the far end by the water, and belly dancers performed in one of the aisles. One side of the market featured local farmers—produce, honey, jam, baked goods, cheese. The other offered arts and crafts, including paintings, pottery and clothing.

In Jacksonville, one is never far from the water. The city sits on the banks of the St Johns River, the longest river in the state and one of the few in the country that flows south to north. The river meets the Atlantic Ocean, which means that porpoises and other sea animals often swim up the river, right through downtown. My brother-in-law is an avid boater, so it was a special pleasure to spend an afternoon on a subsequent day motoring the half-hour to downtown for lunch via the wide expanse of river, cruising past pelicans and anhingas (which are like cormorants) that hang out under the bridges. If one isn’t lucky enough to have a skipper in the family, it’s possible to rent deck boats and pontoon boats for about $200 for a half day. Since there is stuff to do in Jacksonville now and there are many spots to moor a boat, this can actually be a great way to hit several activities in one day and have fun doing it.

For us, no trip to Jacksonville would be complete now without a visit to Riverside, southwest of downtown, and arguably Jacksonville’s coolest neighborhood. There are small, independently owned shops, cafés, bars and restaurants in the Five Points area of Riverside. There is also the Sun-Ray Cinema, which opened in 1927 and was the first Florida theater to show talking pictures. The King Street District in Riverside has been dubbed “Beer Central,” with craft beer bars and two breweries. In the Bold City Brewery taproom, for example, you can try flights of beer, including Killer Whale lager, Mad Manatee IPA and 1901 Red Ale, named for the Great Fire of Jacksonville—the largest urban fire ever to take place in the Southeast.

With all of the city activities, it would be easy (but remiss) not to mention the most obvious tourist attraction: the 20 miles of wide, uncrowded white sand beaches. There are three main areas—Jacksonville Beach, Neptune Beach and Atlantic Beach—all of which are separated from downtown by the Intracoastal Waterway. Visitors can take kayak tours, enroll in surfing classes or simply stroll to the end of the Jacksonville Beach Fishing Pier. “The Beach,” as locals call this whole area, has benefitted from Jacksonville’s more general renaissance, with new restaurants and shops arriving all the time.

This new Jacksonville is an exciting place, indeed.

Perhaps it is small wonder then that on a recent episode of “Ash vs. Evil Dead” on Starz, when Ash meditates on his “happy place” to ward off bad spirits, that place turns out to be a familiar one.

“Jacksonville,” he says, eyes closed, expression beatific. “The place so nice they named it… Jacksonville.”

Art and Song
The Cummer Museum of Art and Gardens, located near Five Points, features a collection that spans from 2100 B.C. through the 21st century and includes work by Peter Paul Rubens, Winslow Homer, Thomas Moran, Norman Rockwell and Romare Bearden. Free admission on Tuesdays, as well as Tapas Tuesdays happy hour, 5-7:30 pm. Beer, wine and tapas are for sale. Visitors can sit on the patio, watch the sunset over the water and listen to live music. cummermuseum.org

Cuisine to Crave
Located in Five Points, Black Sheep has a modern, swanky vibe. Do yourself a favor and start the meal with fried green olives stuffed with pimento cheese. The eclectic menu ranges from Wild Georgia Shrimp & Grits to Korean Beef Short Ribs to Citrus Marinated Tofu. blacksheep5points.com

Maple Street Biscuit Company is a local chain with seven locations, four of them in Jacksonville proper—Jacksonville Beach, Julington Creek, San Marco and Murray Hill. Try the “Ralphie Deluxe,” a flaky biscuit, gravy with a kick and a fried egg. Breakfast and lunch only: 7am-2pm most days. maplestreetbiscuits.com

Sleep Well
Casa Marina on Jacksonville Beach is a unique boutique hotel where FDR, Jean Harlow and Al Capone have stayed (not all at the same time). Their “Fall in Love Package” includes a two-room parlor suite or standard deluxe room, chocolate-covered strawberries and Champagne. $99 plus tax a night. casamarina hotel.com 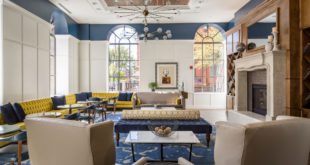 Take a Holiday Staycation in Charm City Where to stay, where to eat and what to do this season