Barbara Schiner is high energy and fearless. So, for her 80th birthday last month, she wasn’t content to sit back and relax and reflect upon the “good old days” of the past eight decades. No, she decided to jump out of a plane.

Well, not jump so much as lean out and fall, she told me the day after her June 11 jump.

“It was marvelous,” she said, emphasizing and drawing out that last word in her enthusiasm. “If you don’t have any responsibilties it’s wonderful. I taught ballet for years — what if I broke my leg? I was always so responsible, but now I’m retired.”

Not that retirement is a laid-back affair for Barbara and her husband, Kent Schiner. Barbara goes to the gym every morning (9 to 10 “to burn off some of my energy”), works with various causes and stops by her grandson’s place during the week to let his dog out, among her numerous other activities. Kent, a financial adviser and former president of B’Nai B’rith, still takes clients and was driving back from Delaware when I chatted with him the same day as Barbara. The following day, two days after Barbara’s jump, they were headed on a monthlong cruise through Asia.

“I love everything I do,” Barbara said. “But I’m going to do something that doesn’t help anyone. I do all these things, but I decided I’d do something just for me, and I wouldn’t let anyone talk me out of it.”

The jump itself almost didn’t happen. With their monthlong cruise looming, Barbara was originally scheduled to jump in early May. When the weather didn’t cooperate, her jump was pushed back to later in the month, which was then also postponed due to bad weather. Her June 11 jump proved that the third time really is the charm. But even as the weather was warm and clear and sunny, a different disaster almost struck — Barbara hadn’t brought her ID. 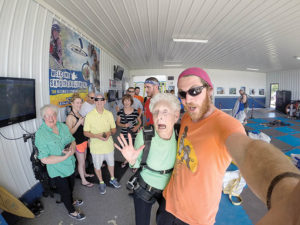 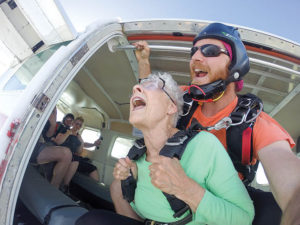 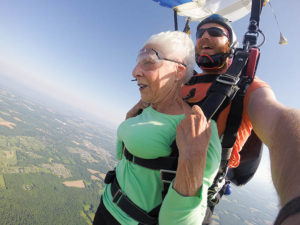 Legally, Skydive Baltimore couldn’t let her jump without it, so the 16 family members who had accompanied her to witness their mother, grandmother and great-grandmother free fall from thousands of feet in the air leapt into action. She ended up with two copies of her license — one from a couple of neighbors who had a key to her house and sent along a photo, and the other from one of her grandsons, a police officer, who had retrieved a copy from the MVA.

“There was nothing that was going to discourage her,” said Kent, who, himself, does not like heights. (“He won’t even ride on the ferris wheel,” his wife noted.)

Barbara was attached to a Skydive Baltimore professional, “a lovely gentleman who says, ‘Let’s have some fun, Barbara.’ and I said, ‘I’m with you, baby!’”

More than just the impressiveness of jumping out of a plane at 80, Kent said what Barbara did was show her family that anything is possible if you have the determination and right attitude.

Barbara readily admits that skydiving isn’t for everyone, but to anyone who’s thought about it, her adivce is to go for it.

There’s no other pressing feats of derring-do on her bucket list for now. After all, this one got her “damn close to heaven.” That’s hard to top.