Air Fare If you're captive at the airport this summer, why not sit down to a good meal? If you happen to be one of the 220 million folks planning to take an airplane trip in July and August, when TSA lines are expected to exceed records, according to the airline industry, you might be looking for a way to de-stress once you’ve made it through security.

Tyler Pitman has got you covered. The senior director of restaurant development for Bethesda-based HMSHost is responsible for much of the food and drink found on the other side of those lines. And this summer, star chefs Mike Isabella and Bryan Voltaggio are scheduled to join the mix at BWI. “Traveling is very stressful, especially for leisure travelers,” says, Pitman, whose job is to populate the over 100 HMSHost airports with appealing comestibles. Instead of the usual fast-food suspects, Pitman, whose resume includes working for Bobby Flay and helping Todd English fill the Food Hall at Manhattan’s Plaza Hotel, looks to partner with chefs of renown.

“People know more about good food these days,” says restaurateur Isabella. In response to these heightened standards, “chefs are opening in airports across the country. There’s a huge movement going on. Look at Express.”

Isabella points to Wolfgang Puck, the guy who practically invented the concept of the celebrity chef. Puck parlayed his Beverly Hills restaurant Spago into a brand that includes frozen pizza and canned soup as well as more than 80 Wolfgang Puck Express locations in malls and airports around the world.

“At the end of the day, we’re cooks,” says Isabella, whose D.C.-area restaurants include the Italian Graffiato, Greek-focused Kapnos and Pepita, a Mexican cantina. “We know how to work with ingredients. Some of them have elements that can be simplified.” Isabella’s Greek-style Kapnos Marketa, planned for BWI’s Concourse B, is already in Reagan National. Voltaggio promises that the chicken pot pie fritters, pimiento mac n’ cheese and fried chicken—along with cocktails and boozy shakes—available on Concourse A will be just like the goods found at his restaurants in Baltimore and Frederick. While he admits that “scratch cooking in an airport” has limitations, Voltaggio says he’s planned carefully. “We’ve chosen menu items that will be representations of what you find at Family Meal, taking every precaution to ensure we can execute it properly,” he says. Besides, he anticipates a discriminating audience: “My kids are already excited about the next trip to Disney, and going to Family Meal.”

What you won’t find, according to Brett Kelly, vice president of Airmall Maryland, which leases out the spaces at BWI, is higher prices than those at the restaurant’s civilian counterparts. In Maryland, “street pricing” at the airport is a state law. “Three times a year, everyone here has to prove to us they are charging the same prices they charge outside of the airport.” Studies show, he says, that “street pricing increases the amount passengers spend at the airport.” Kelly takes the task of pacifying harried travelers seriously. “Airports are the anti-mall,” he says. “When you’re at the shopping mall on a Saturday, you’re in high spirits. When you’re at the airport, you’re highly stressed.” Once passengers have made it through security, he says, “we want to bring them a little leisure, a little of the mall experience.”

Some travelers even plan flights around concourse food. “Rick Bayless’ breakfast tortas [at Chicago’s O’Hare] are amazing,” says Voltaggio. “I’m okay taking a layover there.” He also likes to visit his brother Michael’s sandwich shop at LAX and Shake Shack at JFK.

Passengers spend more time in airports today than they did 15 years ago, says Jonathan Dean, communications manager for the Maryland Aviation Administration, which runs BWI. The increased “dwell time,” as it’s referred to by the industry, means more spending per “enplane” passenger (another industry term). In 2015, says Dean, BWI saw a record 24 million passengers, a figure that is expected to continue to grow this year.

Airmall couldn’t be more thrilled by the crowds. In fact, the company invites non-travelers to a holiday open house each year at Pittsburgh International Airport. On a Saturday in December, shoppers pass through security to stroll the concourses, shopping and dining. “People like the unique luxury brands we have at the airport,” says Nick Guzan, a spokesman for Airmall. The Pittsburgh airport, he says, “has put a lot into its rebranding. It harkens back to a more glamorous jet age.”

This article originally appeared in the July 2016 issue of STYLE.

Share
Previous Italian Queen
Next Meet the interns: Isabel B. 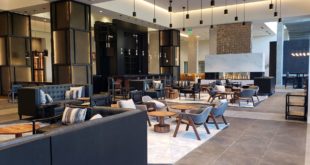