Esquire magazine recently declared that Baltimore’s Prime Rib serves one of the “20 best steaks in the U.S.” Food critic John Mariani in particular praised the way the kitchen roasts its signature prime rib.  (1101 N. Calvert St., 410-539-1804) … >>Baltimore lost one of its culinary classics with the closing of downtown stalwart Martick’s. Owner Morris Martick decided to shutter the French restaurant he’s been running since the 1950s, rather than comply with extensive city building code requirements. This is one Charm City institution that will be sorely missed.  … >>Other restaurant closings around town: Zodiac in the Station North Arts District, the Big Kahuna Cantina at HarborPlace, and VIN, the upscale fine dining restaurant that opened three years ago off of Towson Circle. The developers hope to open a new, revised restaurant concept in that location when construction is complete on the new traffic circle. Several members of the VIN team have moved on to the new Luckie’s Tavern at Power Plant Live. 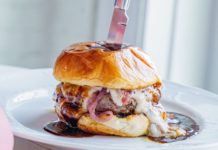 Creating a Culture: The Women Behind The Scenes of No Way Rose